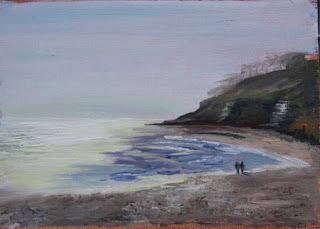 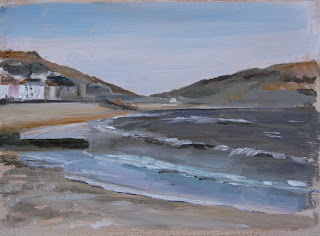 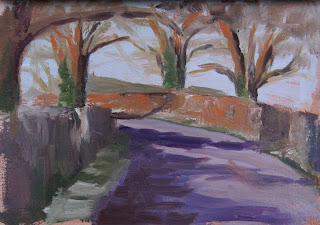 This morning I was up bright and early (well - perhaps not so bright but definatelly early!). I drove on down to Lyme Regis on the Dorset coast. I realised with the sun on the windscreen just how dirty the windows were and how difficult it was to see.. I decided that somehow I would have to wash them once I got there. Luckily for me... there is a police station next to the hall in which I was due to be teaching AND to top it off, there was a policeman in full uniform washing his police car with a hose. So, I thought, there's no harm in asking ... He was lovely, yes he said, please do borrow the hose, so I did at least get the windows clean! Then into the art group, a nice number of 8, really nice people and I enjoyed the morning. After re-parking the car down by the sea I ate my quick lunch and then myself and Moss walked along the seafront with the pochade box and my stool. We stopped to paint the eastern end of Lyme and were frozen to death after about 10 minutes with the really cold east wind. I went as far as I could with that one before being too cold and then moved on to the other end of the beach. I found a spot that was SLIGHTLY more sheltered and sat down to paint the western end of Lyme. Stopped on the way back to treat myself to a luxury hot chocolate with marshmallows and cream (yes, I know it doesn't help the diet but I was cold!). I found a lovely spot on the main road on the way home when the sun was going down and thought what the blazes, so what if it's a main road and stopped the car, got the pochade out and did it as quickly as I possibly could, about 8 minutes roughly! I had no Ultramarine or Umber left on the palette so it was difficult to get the darks and with a queue of traffic waiting to pass me I thought it best to move on! Now worn out!
Posted by Cathy Spearing at 19:06