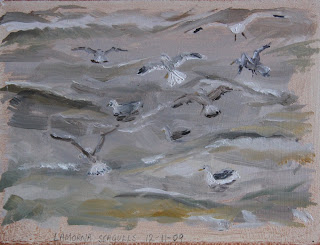 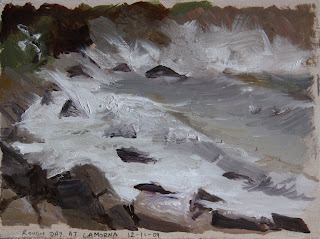 As the sun is shining brilliantly I thought I would go for a complete contrast in the pictures today. I had gone down to Cornwall to paint for a few days in November and I had some of the most horrendous weather imaginable! I decided in my wisdom to sit in the car and paint at Lamorna Cove that day. I set the car up in the harbour carpark facing the sea and rocks that I wanted to paint and organised the pochade on my lap whilst the rain came down in bucketfulls and the wind was blowing a gale (literally). Having done the majority of what I wanted to paint on this picture, there was a sudden gust of wind (the car had been rocking rather violently before this gust anyway) and the next thing, I felt the two offside tyres lift off the ground momentarilly. I had been parked side on to the wind which I presumed is why it happened. Anyway, at that point I made a decision to stop with that painting and face the car into the wind instead with the engine at the front to make it more stable! Then I painted the seagulls playing in the stormy sea. This was even more of a challenge because I had to have the windscreen wipers on FULL blast and even then I couldn't really see what I was painting. I carried on regardless and at least the car didn't blow over. Tomorrow I will show you another painting that I did on the same day at the stream. These are both 6" x 8" oil sketches.
Posted by Cathy Spearing at 10:55