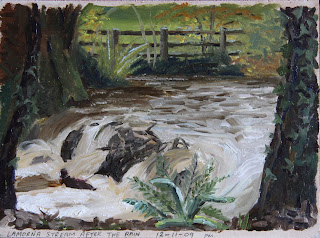 As I said yesterday, I am posting another painting that I did at Lamorna last year. It is of the stream by the Mill. I went up to do this one after I had made an attempt at the seagulls. It was still raining when I got there so I parked up the car again so that I could paint from inside the car. As I sat and painted the stream, it rose about a foot in height and became much faster flowing. I had to make some adaptations to the painting to accomodate the rising levels. Luckily as I was parked under the trees it was much easier to paint because the rain didn't come down so heavily on the car. This is the same spot that Garstin Cox painted in 1914, called Morning in Autumn,, Lamorna. He was a pupil of John Noble Barlow who also painted the same spot called Autumn Woodland Scene, Lamorna. It's amazing to see the tree positions etc as some of the trees are still there but a lot lot bigger! Needless to say, some have gone and now there are more houses around too.
Posted by Cathy Spearing at 10:21